Until rather recently, I’ve always – in my heart of hearts – seen myself as a fanboy.

I’m 30, so I count myself as growing up on the earlier internet – the days of Livejournal, the height of Fanfiction.net, and the days of before being a nerd was a mainstream thing.
During my teens and early twenties, I held this firm belief that a fanboy was a fan of a thing (ie, a Star Wars geek), whereas a fangirl was a fan of the people in that thing (ie, Legolas fangirls). So in an effort to put my best nerd foot forward, and despite always having identified as female, I wore the mantle of fanboy so that – hopefully – the nerd boys wouldn’t metaphorically push me into the mud and steal my toys.
However, whatever brand of fan I was, I was a fan. I wrote fanfic – those who know the history of Require: Cookie know it was born from a fanfic series. I always looked up to other creators, thinking that – although I was creating original content, I was never going to measure up. That I was just some dumb fan, who happened do original stuff.
I’m not sure where, when or how this has changed – I think it might be the realisation that the tenth anniversary me me starting to serialise the adventures of Stef is next year. I’ve known Stef longer than a lot of people in my life.
Ten. Freaking. Years.
Whilst I’ve not achieved the success with Require: Cookie that I think every author dreams of, I’m still proud of my weird little world, and the weird little fans it attracts. I once had someone message me and tell me that, because of Stef – and seeing her start to deal with her issues – that they were going to do the same, that they were going to see a counsellor/get on meds and look after themselves.
Words that I put on the internet changed someone’s damn life.
I gained a brother through Require: Cookie – Wraith, who I initially friended on Facebook to discuss one of the early RP attempts, has become family. Some idiot I met on the internet came and lived in my house (Denver, USA -> Brisbane, AU) for three months!
The player behind the whirlwind of sparks that is Khem and his partner came to Brisbane last year, and gave me the best birthday week I’ve ever had.
What I’m saying is, I’m thankful.
Now…who the FUCK is Vincent? 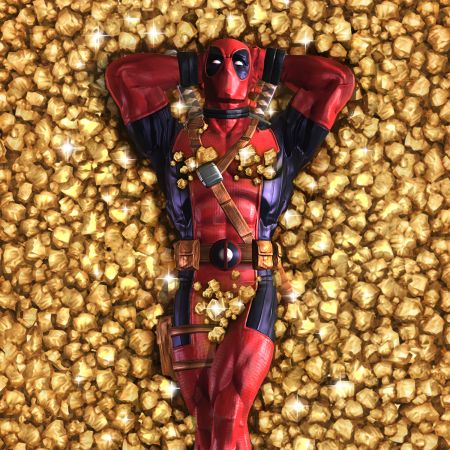 With my above credentials of someone who is elbow-deep in being a fan, my stance on fanworks should be no surprise. I’ve always had a policy of accepting fanworks (I should get that visible on the site again) – whether it’s fanart (which you can see throughout this post), or fanfiction, it’s always been my greatest wish to have people come and play in this world.
I’ve always kind of viewed my work in Require: Cookie as – although several degrees of magnitude less – something akin to laying the groundwork for the Marvel universe. I would love for, one day, a dozen or more concurrent series to be running in this world, in just a many types of media.
So when my brother told me that a friend of his had written some fanfic/wanted to write some fanfic, I immediately wanted to talk to this person.
…and that’s the last time I’ll probably refer to Shade as a person, most of the time, in group chat, it’s “this idiot” or “FUCKYOUSHADE” or “AJHSAKJHJSAHJ”.
Shade wanted to check the canon compliance of the chapter he was writing, and this began a back-and-forth of me checking his chapters for details that he might have missed, or things that hadn’t been established as yet in the series.
Vincent – the recruit character that Shade had created – wasn’t anything like Stef, Curt or any of my gang.
Vincent was funny.
In a lot of ways, he’s like our Deadpool – he’s quick-witted, leans on the fourth wall, and comes with his own parcel of tragedy – when we meet him in canon (look out for book #5), he’s an amnesiac, having suffered an incident with the Solstice, leaving him with memory loss that not even the Agency can rectify.
So, week after week, I’d get these hilarious, short chapters of pure nonsense, and more and more it seemed like there was a place in canon for Vincent – I’d find weird little places where he just…fit.
This was before I’d started the rewrite, but knew enough to know that it was coming, so it gave me a chance to critically examine areas for improvement, and places to include new characters.
At one point, in old canon, there’s an event – there was always a leftover ticket – now, if/when we do that event again, Vincent will get that ticket. And there was a reference to an unnamed character doing something stupid in the Tech Department. A perfect Vincent-tunity again.
So I asked Shade if he’d like to bring Vincent into canon, and we’ve just waiting for a good opportunity to finally have him show his face – we, obviously, had to introduce the world and the status quo first – injecting him into the first four books just wouldn’t have worked.
Now with Book #5, I think the stakes are low enough to have the breathing room to introduce a new character – not least because Jones is going to be using Stef in the Tech Department for a bit, and Curt will need someone to pal around with.
And now…Shade.

How the fuck do you expect me to follow that? If this were a TED talk instead of a blog post, I’d have to wait ten whole minutes for the audience

Asking an amnesiac who the fuck he is…not a great plan.

to stop applauding.
So, Vincent.
I’m also going to start a few years before that one day where I asked Stormy about her universe.
In 2003, I was working at a shitty amusement park, and met a friend who was in the middle of writing the most Mary-Sue Star Wars fanfic I’ve ever seen. I wanted in on it. I wanted it bad. I didn’t even really consider myself a Star Wars fanboy at that time.
Years pass, and we write (bad) fanfic for everything. Star Wars, Yugioh, Star Trek, the Hitchhikers Guide to the Galaxy, X-Men, Doom, War of the Worlds, and so on.
We eventually drifted apart, but I found a small group of friends on the Internet and we became close, and we were all fans of reading and writing. I did discover Require: Cookie at some point during this era, but unfortunately, fell asleep in the middle of the first chapter, and forgot completely about it until later, which I’ll get to in the next paragraph. I dabbled in writing at the time, but never could come up with any one idea that stuck with me for more than a few days at a time.
In 2012, I decided to visit all the friends I had made that lived in the Denver area, and Wraith graciously invited me to stay with him for that week. During this time, he was doing a complete binge on the then-current iteration of RC. He pitched it to me, (although the circumstances of our meeting online to begin with were about the active Cookie forums at the time anyway, so I was a little aware of Cookie by then) and staying with Stormy’s #1 fan and unofficial brother just made me more interested.
I returned from my vacation, and sat at my desk for two days straight, reading Mirrorfall (what is now known as the 2.0 version.)
I loved it.

Jonesy has a way of dealing with spoilers…

I needed to be a part of it.
I shat out the stupidest self-insert shit I’ve ever written. It was nothing but a recruit annoying an agent. I even stole his name from my old writing buddy.
I wrote another chapter to it.
After about the third chapter, I asked Wraith a question about how the universe worked, and he said it hadn’t been explored in canon yet and to ask Stormy.
I was floored. Never in my life had I expected someone who had actually created and posted something on the Internet to acknowledge me in the slightest. I mean, I’ve gotten tweet replies from webcomic artists and such, but that’s nothing compared to actually discussing the building blocks of someone’s own world with them. I was talking Spider-Man with Stan Lee. I was discussing Darth Vader with George Lucas.
The Cookieverse would never be the same again.
So, I finished the half-assed one-shot storyling, and proceeded to ask Stormy “Hey, how would the main cast react to Vincent?” and got a “Oh, god…”
Shit happened, though, and where I was supposed to write a story with Vincent, it turned into life happening and preventing that, and my creative side just kinda stagnated for a bit.
So, now I have my shit together. I’ve helped Stormy write and brainstorm, we’ve got some other people in the Thinktank who are working on their own things, and it’s all slowly coming together like one of Jonesy’s- *is smacked* Sorry, that’s a spoiler.